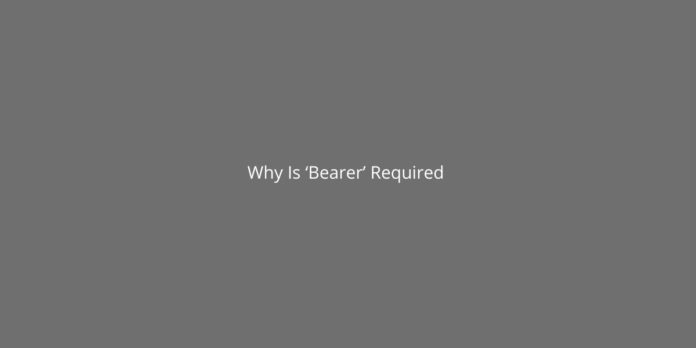 Because they don’t require the cryptographic signing of each request, making API requests using bearer tokens is a much simpler process than using other methods.

Since the request itself contains a plaintext token that could be used by anyone if it were intercepted, all API requests have to be made over an HTTPS connection in order to comply with the requirement. This is the trade-off.

It is not necessary, but rather a convention that has been agreed upon to denote the Authorization scheme that is being utilized.

When the Bearer authorization scheme is in use, it indicates that the application that is currently presenting the bearer token is, in fact, the recipient of the token that was issued.

In English, the word bearer can also be rendered as holder or carrier, among other possible alternatives.

It’s possible that your server has more than one authorization mechanism, each one designed to grant access to a specific type of resource; however, those mechanisms could share the same header and still present themselves as distinct. A word placed in front of the token would make it clear which mechanism the party making the request is making use of.

Basic, Digest, and JWT are a few examples of alternative schemes that could be utilized. In each of these schemes, the value of the token that comes after the scheme is indicated.

This header was used for basic authentication a long time before bearer authorization was ever a thing. Because the use of these headers is governed by W3C norms, you should adhere to them even if you’re reading and writing the header.

This ensures that the headers can be used interchangeably. Because it identifies the kind of Authorization you’re employing, Bearer is an essential component.

What is Bearer Authentication?

The meaning of the phrase “give access to the bearer of this token” can be derived from the name “Bearer authentication.”

The bearer token is a string that contains ciphertext and is typically produced by the server in response to a request for login. When requesting access to protected resources, the client is required to include the following token in the Authorization header: Bearer of the Authorization

What is Bearer token?

With OAuth 2.0, the most common kind of access token that is used is called a Bearer Token. A Bearer Token is an opaque string that is not meant to have any particular meaning for the clients that use it. While some servers will issue tokens consisting of a brief string of hexadecimal characters, others may use structured tokens such as JSON Web Token. Tokens can be issued by both types of servers.

What is the use of bearer token?

Token-based authentication makes use of access tokens to grant an app access to an API. In order to read the user’s scheduled events and create new events, a Calendar application, for example, requires access to a cloud-hosted Calendar API.

In most cases, the Bearer Token is a secret value that is generated by the server. It’s not a random number; it’s based on who gives you access and who gets access to your application.

An Access Token is required to gain access to an API, for example. Tokens of access expire quickly (around an hour). You get a new Access token by using the bearer token. This bearer token and your client id must be sent to the authentication server in order to obtain an access token.

A “Bearer Token” is the most common method of accessing OAuth 2.0 APIs. An HTTP “Authorization” header contains a single string that serves as the API request’s authentication code. Clients have no idea what the string means, and it can be any length they want.

How do I Send a GET Request with Bearer Token Authorization Header?

Bearer tokens are only sent over HTTPS for security reasons (SSL). A bearer token authorization header example is shown by clicking Send to run the GET request and see the results online.

The benefit is that it is much simpler to implement on both the client-side and the server-side, and it does not require the use of complicated libraries in order to make requests.

The Disadvantage of Bearer tokens

Bearer tokens have one major drawback: there is no way to stop other apps from using a Bearer token if they are able to gain access to it.

This is the main disadvantage of using Bearer tokens. OAuth 2.0 is subject to this common criticism, despite the fact that the vast majority of providers only use Bearer tokens anyway.

This is not a problem under normal circumstances, provided that applications adequately protect the access tokens under their control; however, technically speaking, this presents a lower level of security.

You have the option of using a different type of access token if you need your service to have a higher level of security and it will still be able to meet your needs.

What Is Vesta AT&T Prepaid?

What does Announcement 24 mean on Verizon Wireless?